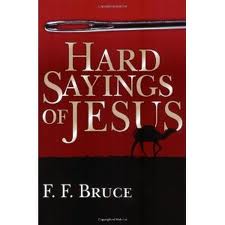 WHAT TO DO WITH THE HARD SAYINGS OF JESUS??

NOT PEACE BUT A SWORD

Mark 4:10-12—When he was alone, the Twelve and the others around him asked him about the parables. 11He told them, “The secret of the kingdom of God has been given to you. But to those on the outside everything is said in parables 12so that,

“‘they may be ever seeing but never perceiving, and ever hearing but never understanding; otherwise they might turn and be forgiven!’£”