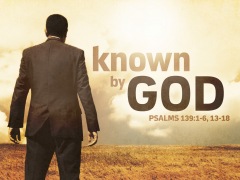 STUDY OF THE BOOK OF PSALM 139

WHAT DOES IT MEAN TO BE KNOWN BY GOD?

·         Too many have low self-esteems because they do not look to the Bible for their worth—and if they do, they forget what it says about them—James 1:23-25

·         Sin ruins God’s wonderful creation but God loves us too much not to redeem us and restore us to His “fearfully and wonderfully made” creation.

BILL MONTFORD’S MUSTANG — he pursued junkyards across the country to find his old high school mustang, found it, and then refurbished it.

·         God wants none to perish—He wants to REDEEM everyone but leaves it up to us whether we desire that or not.

Chuck Yeager, the famed test pilot, was flying an F-86 Sabre over a lake in the Sierras when he decided to buzz a friend’s house near the edge of the lake. During a slow roll, he suddenly felt his aileron lock. Says Yeager, “It was a hairy moment, flying about 150 feet off the ground and upside down.”

A lesser pilot might have panicked with fatal results, but Yeager let off on the G’s, pushed up the nose, and sure enough, the aileron unlocked. Climbing to 15,000 feet, where it was safer, Yeager tried the maneuver again. Every time that he rolled, the problem reoccurred.

Yeager knew three or four pilots had died under similar circumstances, but to date, investigators were puzzled as to the source of the Sabre’s fatal flaw. Yeager went to his superior with a report, and the inspectors went to work. They found that a bolt on the aileron cylinder was installed upside down.

Eventually, the culprit was found in a North American plant. He was an older man on the assembly line who ignored instructions about how to insert that bolt, because, by golly, he knew that bolts were supposed to be placed head up, not head down. In a sad commentary, Yeager says that nobody ever told the man how many pilots he had killed.”